On Sunday, 24 June, I was alerted to yet another racist incident involving the old flag. This time it was in my own neighbourhood: Despatch. During the Apartheid times it was extremely racist and like Uitenhage was ruled by the Conservative Party. Even the controversional Afriforum organisation has distanced itself from protestors using the old South African flag. The Facebook group Inwoners of Despatch is notorious for racist rants, usually in Afrikaans against the new South Africa, crime and people who are proud of the flag of their fathers.

Rodwill Bacon brought this to my attention by a post on his Facebook Timeline. They banned him when he questioned their comparison of the old South African flag with the new one. So I joined the group to gather evidence. The group admins are Karel Bredenhann and Lindie Bredenhann, owners of Pikkies Skips, a waste removal company. Despatch a small town in the Eastern Cape, between Port Elizabeth and Uitenhage, all three forming the Nelson Mandela Bay Metropolitan City.

What shocked me was not that most comments agreed with Petrus Robberts, the original person who was proud of the old South African flag. The most shocking was the fact that Nelson Mandela Bay’s ward 52 DA councillor Francois Greyling, is also an admin of this racist group on Facebook.

So help me share this and let’s make Petrus Robberts and the Bredenhann’s Internet famous. Feel free to copy, paste, share across all your social media. p.s. I’ve reported this post to #Facebook, the group admins, and planned to lay a charge with the SA Human Rights Commission and the Nelson Mandela Foundation, who have already spoken out about similar incidents in the past.

These are the current admins of this Facebook group, who have banned Rodwill Bacon after he tried to engage with them about why the old South African flag is a form of hate speech, and reminds every non-white South African about the decades of suffering from Apartheid.

Rodwill Bacon posted this message, and I’m re-posting it here, so you see the civility of his concern:

So this actually happened to me today. Someone posted a picture of the old apartheid flag on inwoners van despatch on facebook saying that the new flag represents murder, corruption and racism. That the old flag is their flag.

Me, being me…wanted to comment immediately and give them a piece of my mind…but I was a bit late for church and decide to comment later if no one said something. I went to church…the message was to keep calm when facing the problem as it prevents unwanted problems etc.

I came back home, this post still bothered me. I decided to comment but in a respectful manner. Told them what the previous flag represented etc. Obviously, it fell on deaf ears. Some responded positively.

However…I have to admit, racism is alive and well. I was so disappointed by the comments prior to mine. People supporting the old flag and what it represented. Some took it even further and spoke about ” die stem”. My comment had positive responses from white people on the group as well…but the older folk….well, disappointing, to say the least.

In the end, I have been blocked from the Inwoners van Despatch Facebook group for my comments, which were made in a calm and respectful manner. What I want to say is…please do not shy away from racist posts, stand up for something, say something. We cannot be intimidated by racism and keep quiet. It has to be addressed. 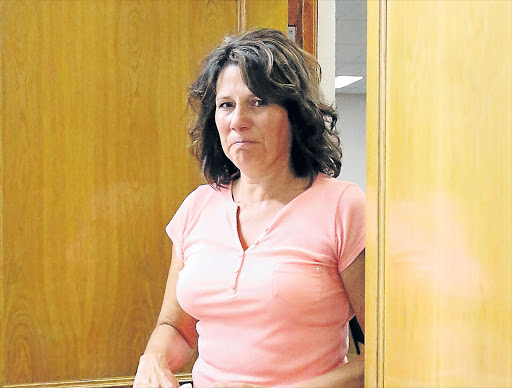 The ward councillor for Despatch is Francois van Niekerk Greyling and he was co-owner of Just Letting franchise in Uitenhage. He is also the husband of the convicted thief, Yvette Greyling, who stole R880,000 as a real estate agent from 2012-2014. The franchise was co-owned by husband and his wife. Why is a ward councillor also selling houses in his own area?

Mr Greyling is one of the Admins of this Facebook Group Inwoners van Despatch. On Sunday, 24 June at 19:12, I sent him an SMS and called him with no reply. Later I sent him a Facebook message sharing my concern about his association, and hoping that he would address this directly with the Petrus Robberts, Karel Bredenhann and Lindie Bredenhann. It’s now been 5 days and he still hasn’t bothered calling me back. Why are you still voting for this man with questionable integrity? Why is an elected public official not saying anything about this?

What is wrong with using the Old South African Flag?

They have since banned me from this group as well, instead of engaging in dialogue. Facebook also removed my initial post, hence I’m writing this even more detailed blog to expose them all. This not the first time the Democratic Alliance has been involved with issues around the old South African flag and the painfull memories that arises from it’s display, let alone celebration of what it represented.

Kieno Kammies discussed it on his radio show on Cape Talk / Talkradio 702 in 2017.